Brexit with brie? Common Market 2.0 proposal explained – through the import and export of cheese

Brexit with brie? Common Market 2.0 proposal explained – through the import and export of cheese

Amid the ongoing Brexit standoff, one proposal that has been gaining traction and which MPs will now vote on in a series of indicative votes in parliament, has been the cross-party plan for a “Common Market 2.0”.

Superficially, the plan resolves a number of the challenges posed by Brexit, including the thorny issue of the Irish border and the UK’s future trading relationship with the EU. But the plan – also known as Norway+ because it has similarities with the EU’s relationship with Norway – involves the UK compromising on a number of its current red lines, while at the same time requiring a fundamental revision of one of the EU’s existing free trade agreements.

One way to understand how a Common Market 2.0 might work – and how it would differ to other options on the table – is to look at one type of good that might move between countries. Say, cheese.

A customs union is a more advanced form of trading relationship, where you agree not only to remove any tariffs on each other’s goods, but also to apply the same tariffs on goods originating from third countries. This means, for the purposes of the EU customs union, that Monterey Jack will be treated the same whether it is imported to Belgium or Bulgaria. Within a customs union it’s unnecessary to check from where goods originate when they cross a border as they will already have received the appropriate customs treatment.

The Common Market 2.0 idea is an attempt to reverse engineer the previous 25 years of EU integration, reverting the UK’s participation in the EU to the position before the Maastricht Treaty was agreed in 1992. 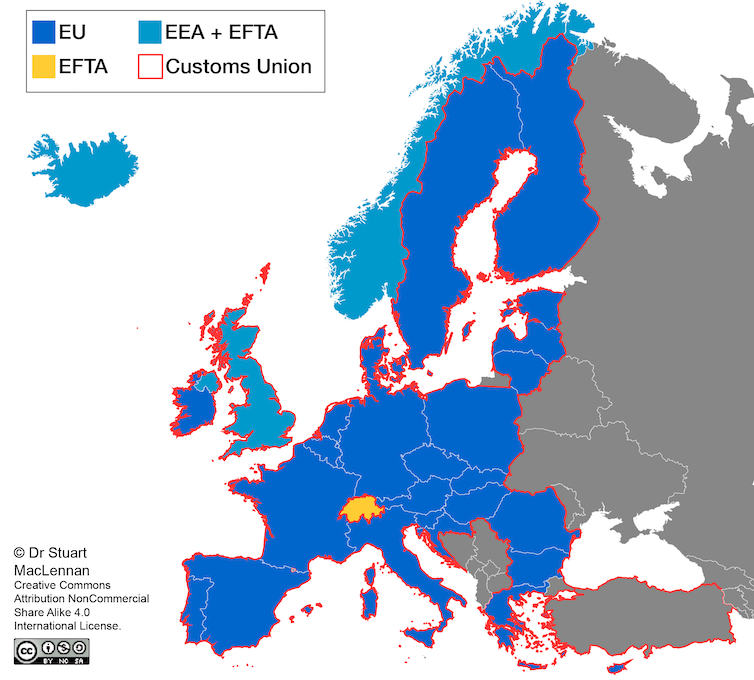 Under Common Market 2.0, the UK would be the only state outside of the EU to participate in both the EU customs union and the single market. The lack of a red line bisecting Ireland is the reason why a customs union is so attractive.
Dr Stuart MacLennan

Such an approach would result in the UK adopting EU-EEA measures relating to the internal market, including the free movement of goods and services, and competition law. But the UK would no longer be subject to the direct jurisdiction of the Court of Justice of the EU, which would be replaced by the jurisdiction of the EFTA Court.

What moves the Common Market 2.0 proposal beyond simply replicating the Norway model, however, is that it also involves the UK entering a customs union directly with the EU, thereby removing the need for rules of origin checks on the Irish border between Northern Ireland and the Republic of Ireland. Checks on cheese moving between Norway and Sweden are rare – but they do happen. By entering into a customs union with the EU such checks along the Northern Irish border would never be necessary.

Read more:
Brexit: why was the Irish border ‘backstop’ so crucial to Brexit deal defeat?


The major stumbling block with Common Market 2.0, however, is that under the EFTA agreement it’s not currently possible for member states to enter into a customs union with other states – whether the EU or otherwise. So Norway cannot enter into a customs union directly with the EU, or the US, for example. If the UK were to seek this, it would require special treatment not only by the EU, but by EFTA as well – the political difficulties of which have been largely overlooked.

The Common Market 2.0 arrangement would also, controversially for many, involve the UK continuing with the free movement of persons. The key piece of legislation providing free movement rights for EU and EEA citizens – directive 2004/38 – was incorporated into EEA law in 2007.

One saving grace for the UK might be the joint declaration attached to that 2007 EEA decision that it cannot be the basis for the creation of political rights, and that the directive does not impinge upon immigration policy. This reflects the fact that the primary focus of EEA law is on economically active migrants, rather than EU citizens.

Read more:
Brexit: a Norwegian view on the Norway-plus model and why it wouldn’t be easy for the UK


The Common Market 2.0 approach is therefore unlikely to be viable. Not only would it enrage the right wing of the Conservative Party, it would require agreement from the EU, the EEA and Switzerland. Given the difficulties the UK has had agreeing a deal with one trading bloc, trying to win over three – the EU, the EEA, and EFTA, as well a domestic audience – looks near-impossible.

This article is republished from The Conversation under a Creative Commons license..

Privacy, GDPR and Ireland as a one stop shop